Stocks could be caught in a tug-of-war in the week ahead, as investors weigh the potential positives of a reopening economy against worry that the coronavirus continues to spread.

In the past week, the S&P 500′s sharp gains briefly drove the index into positive territory for the year, before a bruising sell-off at the end of the week. Stocks were more than 47% above the March 23 low before investors got spooked by signs the coronavirus is picking up in some areas.

The Fed also dampened sentiment when it released economic forecasts Wednesday that showed a slow recovery and interest rates at zero through the end of 2022. Investors will hear more of the same when Fed Chairman Jerome Powell speaks before Congress this Tuesday and Wednesday in his semi-annual economic testimony. He may provide more clarity on the Fed’s bond buying and other policy moves.

Retail sales for May are released Tuesday, and that will be an important look at consumer spending activity. It is the most important data in the coming week, other than the weekly jobless claims report on Thursday.

Stocks rose on Friday with the S&P 500 up more than 1% after Thursday’s sharp sell-off that sent the index down nearly 6%. Treasury yields, which move opposite price, also moved sharply lower as investors moved to the safety of bonds. The 10-year yield was back to 0.70%,  well off the high of 0.95% in the week earlier.

“We’ve been overbought for awhile and digesting gains would be natural,” said Sam Stovall, chief investment strategist at CFRA.

Stovall said the fact that 97% of the S&P 500 companies’ stocks were above their 50-day moving average this past week was a warning. The 50-day moving average is a momentum indicator, and if a stock or index rises above it, it is usually a positive, but if they all do, it’s a contrarian warning.

In the sell-off, stocks that would benefit from the economy’s reopening were the hardest hit. Investors had been jumping into those names, driving them higher at a dizzying pace. They were also the sectors that were last to join the rally, like banks, casinos, airlines and hotels.

“Once the pullback runs its course I think investors will move back again into the sectors and subsectors that were most beaten up in the bear market,” said Stovall.

Scott Redler, partner with T3Live.com, said he lightened up his holdings earlier in the week. “There were some clues early in the week that the market was vulnerable, like when the S&P closed below 3,191 on Tuesday. You had some feverish trading in some of the very speculative names,” he said.

Stovall said other headwinds hang over the market, and one big one is the upcoming presidential election, which could become a bigger influence on the market. RealClearPolitics has President Donald Trump trailing former Vice President Joseph Biden by 8.1 points in the latest average of polls.

“Trump’s numbers are just looking so bad, and if the Fed needs to keep interest rates at zero and we have the potential for a resurgence in Covid cases, then Trump is not going to benefit from an economic recovery, and as a result, that gives Biden a better chance of being elected,” said Stovall. “It’s not necessarily that the market dislikes Biden, but they dislike uncertainty. And a decline in equity prices would be representative of that uncertainty.”

Retail sales are typically a barometer for consumer spending, and when Americans were shut in their homes they did much less shopping than usual. April data showed a 16.7% drop in sales, but consumers did spend online.

Economists are watching Tuesday’s report on May sales closely, particularly after the May jobs report had a large upside surprise. There were 2.5 million jobs added in May, instead of an expected loss of 8.3 million.

Mark Zandi, chief economist at Moody’s Analytics, said business-to-business spending data for May implies that retail sales were flat compared with April’s depressed level and could be down 22% from a year ago.

Zandi used data from Cortera, which collects information on about $1.5 trillion in business-to-business spending. In an analysis of spending by retailers in May, it found there were gains from April in some categories, including furniture, gasoline stations and restaurants.

“Clothing and sporting goods store sales have been crushed, and that continued in May.  Restaurants,  gasoline stations and furniture stores have been hit hard, but showed strong improvement in May. Food and health and personal care stores have done well through the crisis, but gave some of that back in May,” notes Zandi. “Online retailers, general merchandise stores (which includes WalMart and Target), and building material and garden supply stores (Home Depot and Lowes) have navigated the crisis well, and May was another solid month.”

Zandi said weakness in apparel and sporting goods washed out the gains in other areas. 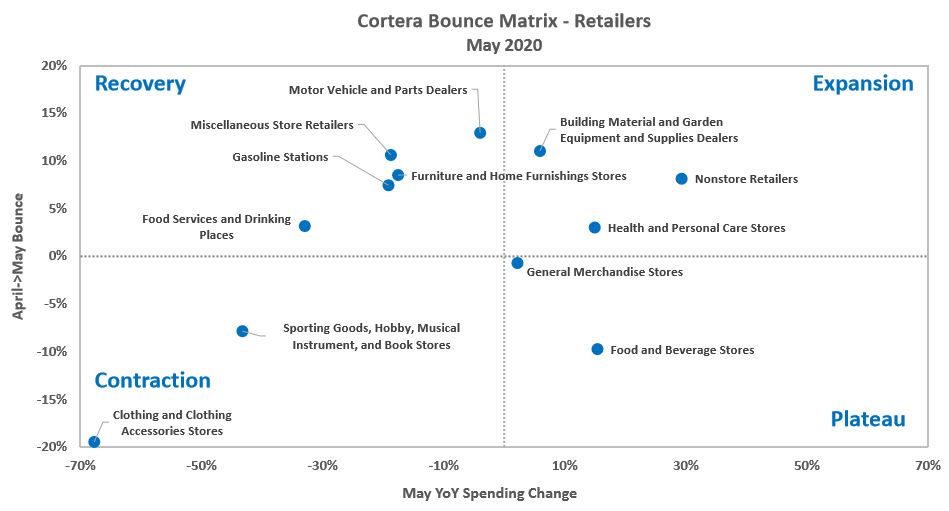 Strategists said Powell did not surprise the market with his comments this past week, but his sober approach reminded investors that the Fed policy will have to be in place for a very long time to pull the economy out of its deep rut. That will keep markets on high alert during his two days of testimony.

“I think the cat’s out of the bag. I don’t think he can sugarcoat it. The thing he’s got to worry about is he needs help. He needs Congress and the administration to come up with another fiscal rescue package. He can’t do it on his own,” said Zandi. “He has to keep the pressure on them and get a piece of legislation before they go on August recess.  … He’s speaking as much to the American people as he is to the policy makers.”

Zandi said the Fed has acted aggressively and swiftly to unfreeze credit markets when they locked up in March, but the economy needs more stimulus ahead of a wave of potential business defaults and with a high level of unemployment. The Fed’s balance sheet has ballooned to $7.2 trillion, and on Wednesday the central bank committed to monthly purchases of $80 billion in Treasury securities and $40 billion in mortgage securities.

“I think he continues to lay the foundation for policy changes to come,”  said Zandi. “He’s strongly suggesting there’s going to be more monetary support, and that would come in the form of a few things – it would be performance dependent forward guidance. … He’s going to make it clear until the economy is at full employment and inflation is at least at target, if not above.”

Zandi said Powell may discuss yield curve controls, which would mean the Fed would set targets for interest rate levels in the Treasury market, and make purchases to influence rates. Some economists believe the Fed  will adopt that tool before the end of the year.

“I think he’s going to more clearly define the amount of QE they’re doing going forward. He’ll try to preserve some optionality, but he’ll try to make it known, they’re buying a lot of bonds for a long time to come,” Zandi said.

But the hearings could be more politicized, and Powell may be criticized by Congress for helping financial markets more than Main Street, said John Briggs, head of strategy at NatWest Markets. “I’d be surprised if there’s a lot new, given it comes on the heels of the FOMC meeting,” Briggs said.